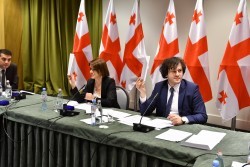 “Today, we the State Constitutional Commission supported the document fundamentally changing the regulations related to the administrative system in the Constitution of Georgia”, - the Speaker, Irakli Kobakhidze stated after the sitting.

The SCC supported the draft of Revision of the Constitution with 43 votes against 8.

The Speaker noted that it is the first time in the history of independent Georgia when the Government restricts own subjective guarantees. “It is the first time when the changes contradict with the interest of the ruling party. It is the aspiration the document is formulated with. The Parliament had two goals outlined. First of all, it was provision of full compliance of the Constitution with the principles of the Constitutional Law and this goal is thoroughly achieved. As to the second goal, it envisaged creation of the resolute Constitutional fundament for formation of stable, pluralistic and democratic Parliamentary administration system. The second mission is as well accomplished. It is the greatest achievement and we hope that the Parliament will support the document”.

Approximately 70-80% of the changes were initiated by the experts, NGOs and other Constitutional agencies. “I cannot recall such scale of involvement and inclusiveness in the activity of the State Constitutional Commission during our brief history. On the basis of the wide involvement we have developed an improved document in full compliance with the principles of the Constitutional Law and forming the improved model of Parliamentary administration based on the best practice of European countries”.