The Changes to the new Constitution supported with 115 votes 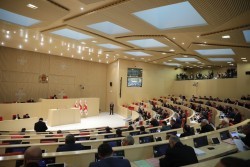 The Parliament with III reading unanimously adopted the changes to the new Constitution with 115 votes.

“Dear colleagues, I would like to thank you for supporting the Bill. Thus, we accomplished the long and hard process of the Constitutional reform as a result of which we have an improved Constitution of the European type”, - the Speaker, Irakli Kobakhidze stated after voting.

He introduced the Bill and spoke about the editorial changes aiming at reflection of the recommendations of the Venice Commission to the Constitution. The changes will enter into force upon swear-in of the newly elected President in October.