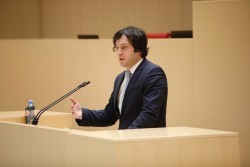 The Speaker spoke about the editorial nature of the changes to the Constitution aiming at reflection of the recommendations of the Venice Commission to the Bill. According to the draft, the Article 5 shall be supplemented with the paragraph envisaging that “the state shall ensure environmental protection and rational use of natural resources”.

The Changes are to be introduced to the Article 16 regulating freedom of conscience, confession and religion. The record on the autonomy of the Universities shall be added to the paragraph 3, Article 27 ensuring academic freedom and autonomy of the universities.

Deriving from annulment of bonuses, sundry paragraphs shall be withdrawn from the Constitution. The change ensures transfer to the proportional system. Thus, the electoral blocs shall as well be allowed to the forthcoming Parliamentary elections.

The change to the Article 50 concerning the Presidential elections substitutes the term “voter” with the “member of the electoral panel”.

The change is introduced to the Article 18 concerning accessibility to public information. Another change concerns the electoral disputes and the respective authority of the Constitutional Court.

The Parliament will adopt the draft Constitutional law with the III reading.