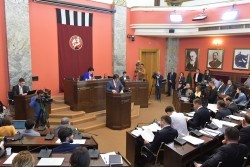 The Committee unanimously supported the draft Constitutional Law with the III reading, introduced by the Speaker, Irakli Kobakhidze.

He introduced the technical and editorial changes and answered the questions.

The Bill aims at reflection of the Venice Commission recommendations in the new Constitution.

The Committee supported the stricter legal norms for combating “thieves-in-law” and considered with the I reading the Bill on Organized Crime and Racket”.

The package of 6 Bills authored by the Interior Ministry envisages effective struggle against thieves-in-law. The Bill was introduced by the Deputy Interior Minister, Natia Mezvrishvili stating the aim of the changes to enhance struggle against the organized crime. “The package enlarged the list of the actions doomed to be the crime after enactment of the law. The Articles of the Criminal Code shall be reformulated in stricter manner envisaging punishment for membership of the mob. Thieves-in-law is recognized as the particularly grave crime and the actions are subject to punishment not only upon commitment but at the early plotting stage”, - she stated.

The new definitions are formulated as follows:

N. Mezvrishvili stated that when considered at the Human Rights Committee, the changes were introduced to some formulations.

She answered the questions. The Committee supported the Bill.