Tamar Khulordava: we managed to develop the improved text of the Constitution, which in long-term run will ensure democratic development of Georgia 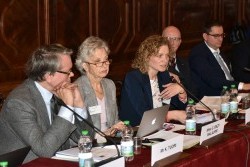 “In the nearest future, the Parliament will vote with the III reading the draft Constitution. I am glad that with our cooperation, constructive involvement and Commission support we managed to develop the improved text of the Constitution, which in long-term run will ensure democratic development of Georgia”, - the Chair of the EU Integration Committee, Tamar Khulordava stated at the Venice Commission plenary session.

She thanked the President, Secretary and the staff of the Venice Commission on behalf of the Speaker for cooperation. The reform aimed to ensure full compliance of the Constitutional system with the fundamental principles of the Constitutional law, which will facilitate to long-term development of the country. “Being a country that back in 2010 was only partially transformed from the Presidential into a parliamentary state, the entire political class and the civil society in our country saw the need for the refinement of the constitution; for reformulation of the powers and responsibilities of the branches of Government, for clear delineation of competences between various constitutional bodies, the absence of which had at times created awkward situations in practice”, - she noted.

The ambitious plan of the reform was been developed after the Parliamentary elections 2016. She underlined that the milestone of the process was public acknowledgement of the value and importance of European expertise by the Speaker of the Parliament and the Chair of the Constitutional Commission, Irakli Kobakhidze.

“After some unsuccessful attempts of undertaking constitutional reforms, following the Parliamentary elections in late 2016, we launched quite an ambitious constitutional reform plan that implied that within 4 months the State Constitutional Commission (with participation of major parties and the civil society) would develop a draft text of constitutional amendments. As a result of intensive work that was carried out under great public scrutiny, the draft was elaborated. I consider it one of the cornerstones of the pro cess that at the very start of the reform, the Chairman of the Parliament and the Chair of the State Constitutional Commission, Mr Kobakhize publicly acknowledged the importance and the value of European expertise in the process and committed that no amendment would be reflected in the draft text if it were not positively assed by the Venice Commission. We are proud to say today that this ambitious commitment has been honored and duly respected”.

She emphasized the fundamental changes envisaging higher plurality and representativeness of the Parliament. “With the amendments we finally divorce a system that consecutively, for all the past years has led to strong one party domination in Georgian Parliament. This is why it is so important that Georgia shifts from the mixed electoral system to the fully proportional one. It was this inherent feature of strong one party domination that prevented the Georgian Parliament from becoming a critical actor in the Georgian political system. With the amendments however, the parliament becomes more representative – pluralistic and its role of powers are considerably strengthened. More exact reflection of voters attitudes in the composition of the parliament is ensured through a fully proportional electoral system. Despite internal challenges and divided opinions we managed to completely take away even a very restricted advantage – a bonus which was seen as an attempt to maintain certain political stability. The Parliament of Georgia taking into consideration the recommendation of the Venice Commission changed the original system of distribution of undistributed mandates through consecutive distribution among all political parties that manage to overcome electoral threshold. For a country with still quite fragmented and polarized political landscape this is a brave and quite a radical move in the right direction; in the direction to pluralism and the political culture that requires cooperation of political parties”.

While we will be moving to fully proportional system only after the 2020 Parliamentary elections, it shall also be stressed that we have significantly changed the election system already for 2020 Parliamentary elections – by lowering the election threshold from 5 to 3% and by allowing for this one time electoral blocks we are creating more conducive environment for smaller parties promoting parliamentary pluralism and I am happy to note that these steps are duly recognized as effective means by the Venice Commission to ensure pluralism and small party representation in the parliament, she stated.

“While it is indeed regrettable that it was not possible to make a political decision of shifting towards the fully proportional system from the next parliamentary elections, we believe it is only fair for the opinion to recognize that the system we have for the 2020 parliamentary elections is in full compliance with the best European traditions and the fundamental principles of the constitutional law. The choice between proportional and single mandate majority system is the matter of political choice, but both are legitimate as many member states of this distinguished commission also have such systems in place.

On the basis of the preliminary communication with the Venice Commission held prior to adoption of the second opinion on the Constitutional changes, in October 2017 the Georgian Government has pledged to adopt the supplementary amendments concerning annulment of the unanimous adoption of the decision regarding annulment of the bonus system, admission of the blocs for 2020 Parliamentary elections, reformulation of the Article on confession, consciousness and religion and non-Constitutional nature of the elections by the Plenum of the Constitutional Court. All the promises are duly respected and reflected in the final opinion of the Venice Commission.

To conclude – we have come to an end of a very important, even historical moment. Georgian parliament will soon have a final vote on the text and I am happy to state that with our cooperation, with the constructive engagement and support of this distinguished Commission, we have developed a very advanced text, a sound Constitution that will serve long-term democratic development of my country by establishing a system fully in line with the best European traditions of parliamentary democracy”.