Gianni Buquicchio: I would like to note the diligence of Mr. Irakli Kobakhidze – he has done his best for the successful outcome 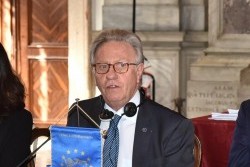 G. Buquicchio thanked the Speaker for his hard work.

“It is an improvement. As I have already mentioned, we cooperate with Georgia since 1993. Several changes have been adopted to the Constitution since. The hereof Constitutional reform is a significant improvement. I would like to particularly underline the devotion and hard work of the Speaker, Irakli Kobakhidze who has done his best to achieve this outcome”.