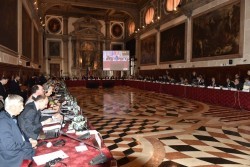 According to the opinion on the Constitutional amendments developed by the Parliament and adopted on December 15, 2017 with the II reading, the amendments even further improve the text of the Constitution based on the Venice Commission recommendations.

The Commission hails replacement of the mixed with the proportional system to be enacted after Parliamentary elections 2020 and hails the transitional norms envisaged under the amendments for elections 2020. Along with reduction of the threshold from 5 to 3%, the Parliament in line with the Venice Commission recommendations has admitted the single manner participation of the blocs in the elections, which facilitates to representation of the smaller parties in the parliament and increases pluralism.

The Commission approves annulment of the bonus system for the proportional system and distribution of undistributed mandates to all the parties overcoming the threshold. The changes adopted with the II reading on December 15, 2017 create the favorable conditions for the small parties and serves for provision of pluralism in Georgia.

“The Venice Commission issues another positive opinion and states that the Constitutional reform completes evolutions of the political system of Georgia to the Parliamentary system and is the step forward for improvement and consolidation of the Constitutional arrangement of the country on the basis of the fundamental principles of democracy and rule of law. The new changes improve the text of the Constitution. Prior to the second opinion, the Georgian Government in October, 2017 has pledged to introduce the changes to the text. The draft changes cover the promised changes and are based on the preceding recommendations of the Commission”.

The document once again confirms that the Venice Commission if necessary, is committed to cooperate with and assist Georgian Government.