According to Tamar Chugoshvili, the Constitutional reform has been assessed by all competent international organizations as an important step forward 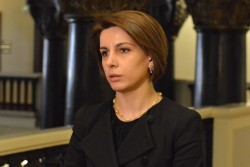 “It is important that the Constitutional changes and the reform were assessed by all competent international organizations as an important step forward for development of Parliamentary system and finalization of evolution. This is the aspiration just recently shared in the PACE Resolution giving the positive estimation to the Constitutional changes”, - the First Vice Speaker, Tamar Chugoshvili responded to the GYLA report.